Preliminary statistics and, even more so, indications on the ground in the current hurly burly of deal-making are sending strong signals of another very competitive real estate market in San Francisco as we approach spring. If it continues to develop as it’s looking right now, this would make the 4th intense spring season since the market recovery began in early 2012.

Once again, buyer demand has surged early in the new year without a corresponding increase in listing inventory: High demand meets low supply generates competitive bidding – sometimes fiercely so – and upward pressure on home prices. This doesn’t mean every listing is selling over asking price or even selling at all – even in a red hot market, 20% – 30% of homes are price reduced before selling or withdrawn from the market without a sale taking place (usually due to overpricing). There are also hotter and cooler pockets within the market: Right now, more affordable homes – for example, condos under $1 million – appear to be in particularly high demand.

Sales statistics of one month generally reflect offers negotiated 4 – 6 weeks earlier, i.e. they are a month or so behind what’s actually occurring in the market as buyers and sellers make deals. Sales volume in January and February was down 20% year over year, reflecting a market that pretty much shut down in the last two weeks in December, and then started the year with extremely low inventory. 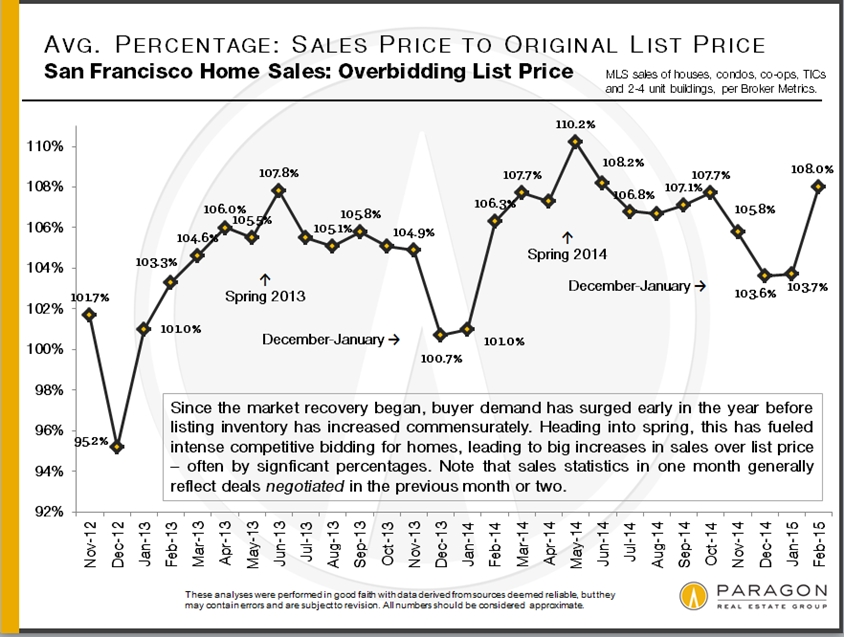 This chart above illustrates seasonal trends in competitive bidding, which underlies the phenomenon of homes selling for over asking price. For the last few years, the average percentage of sales price to list price has been peaking in spring. But already in February, prices averaged a whopping 8% above asking – very few other markets in the country are seeing anything similar. Drilling down by property type, SF house sales in February averaged 12% over asking, condos averaged 7% over, and 2-4 unit buildings 2%. Houses are becoming a smaller and smaller percentage of city home sales (since virtually no new ones are being built), which has generally made them the most competitive market segment.

In previous years, the percentage over asking has peaked in May, reflecting offers negotiated in late March, April and early May. 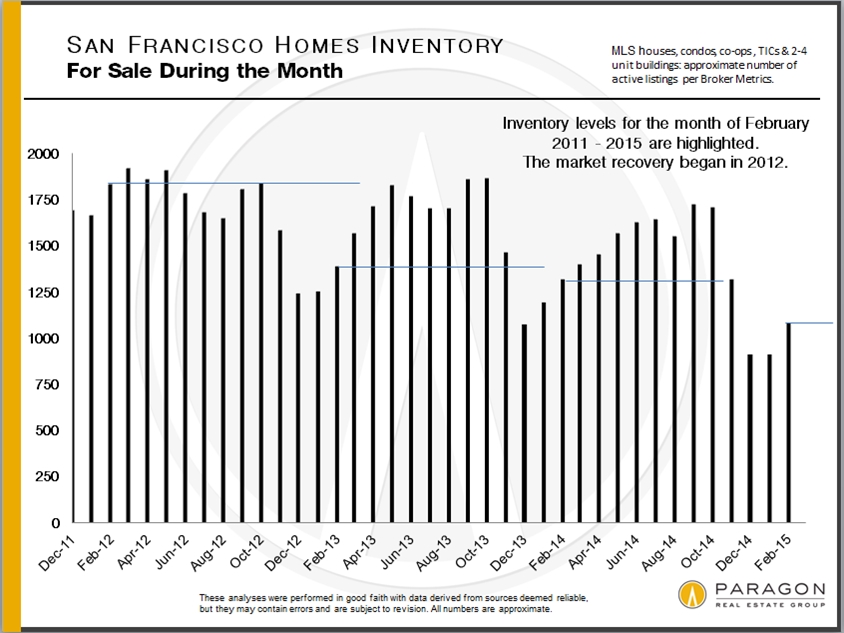 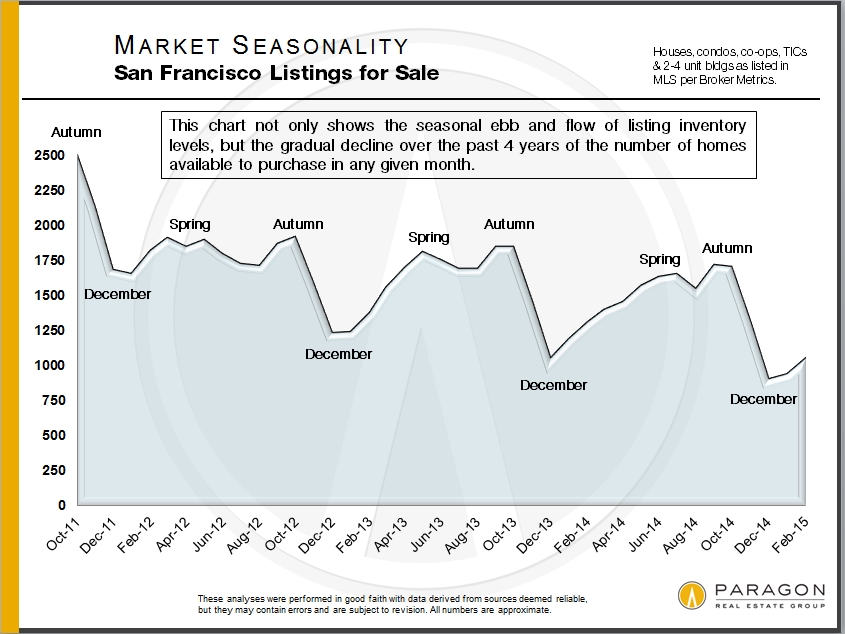 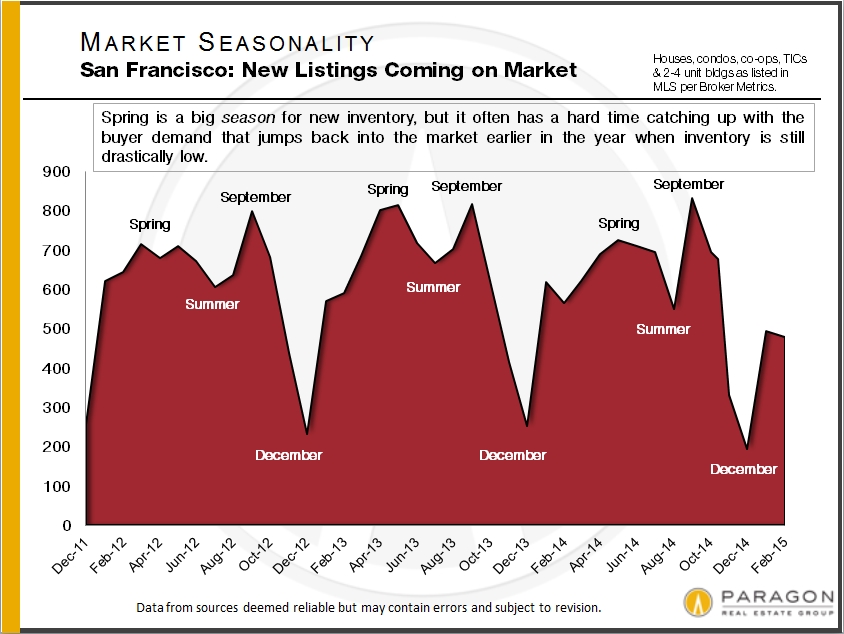 Seasonality in the Bay Area often has more to do with summer and winter holidays than the actual weather since, unlike back east, January and February often look more like spring here. New listings and overall inventory bottom out in December, and then slowly rise in the new year. What is super-charging the market is that buyers woke up after the holidays and jumped back in the market much earlier than sellers have put homes up for sale in quantity. For the past 3 years, this unbalanced dynamic between the high pressure of buyer demand pushing against an insufficient supply of listings continued through spring, causing dramatic home-price increases, until the market slowed during the summer. We shall soon see if prices can jump higher once again in coming months.

Days on Market before Acceptance of Offer 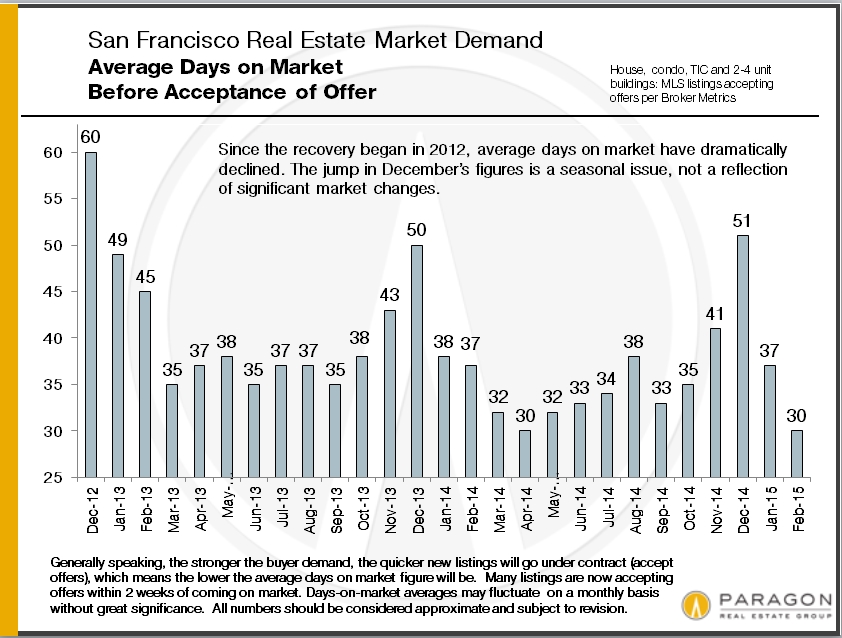 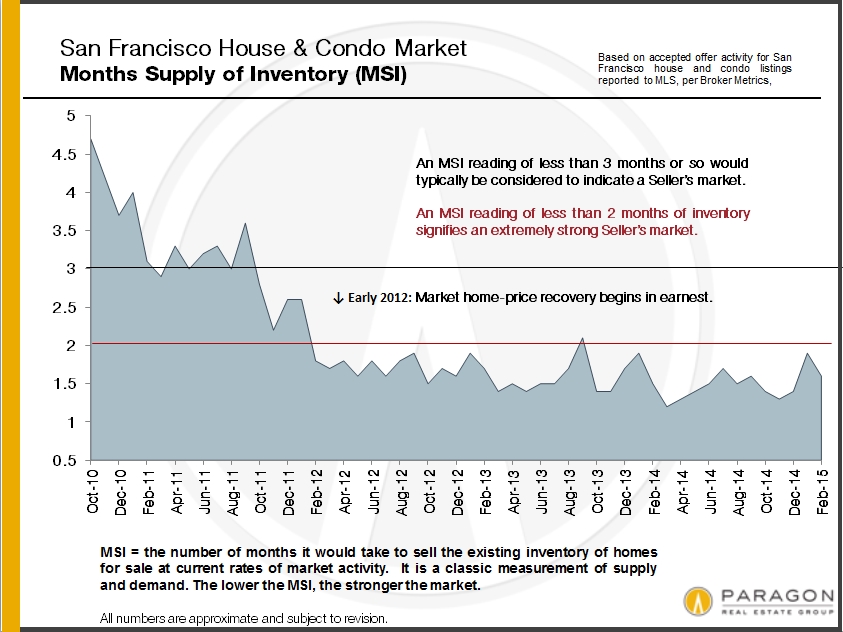 The greater the demand, the faster listings go into contract (i.e. accept offers), and the lower the average days on market (DOM) and months supply of inventory (MSI).Both these statistics are currently in deep “seller’s market” territory. Of course, this could change dramatically if we get a sudden tsunami of new listings or if a large, negative economic event happens, but right now, we don’t have any reason to expect either to occur in the next few months.

As points of comparison, the national average days-on-market is more than twice that of San Francisco’s (approximately 69 days vs. 30), and the national MSI figure is almost 3 times higher than the city’s (approximately 4.7 months of inventory vs. 1.6). Many new listings in San Francisco are going into contract within 7 to 14 days of coming on market, as eager buyers swarm over them.

This map gives a very general idea of comparative home values around the Bay Area. Remember that median prices will often disguise enormous variety in the underlying individual home sales. 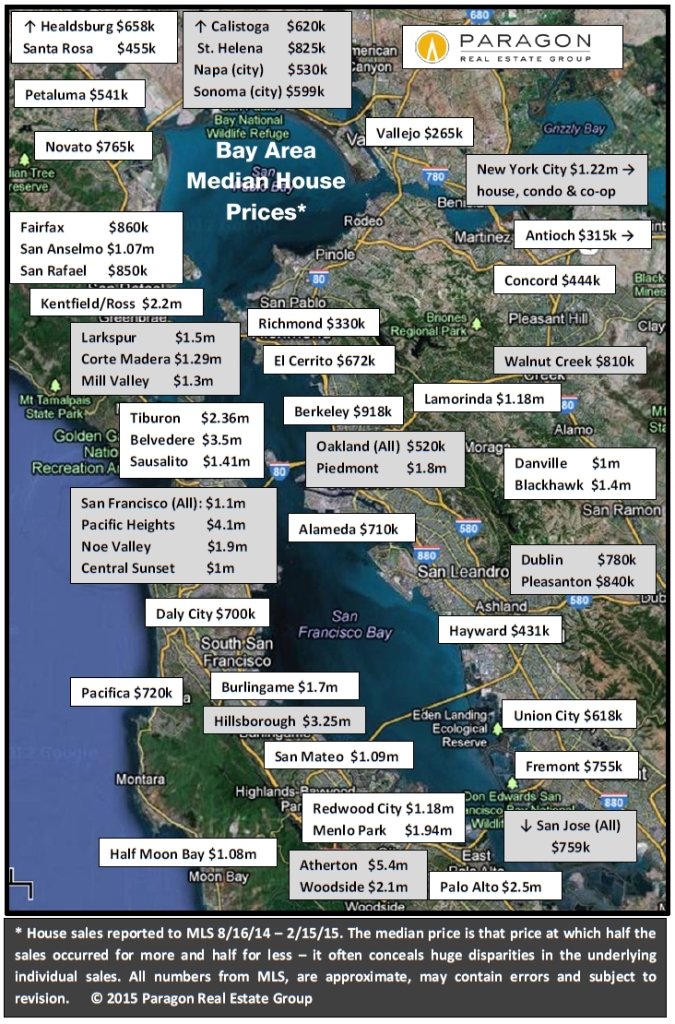 Renting vs. Buying in San Francisco 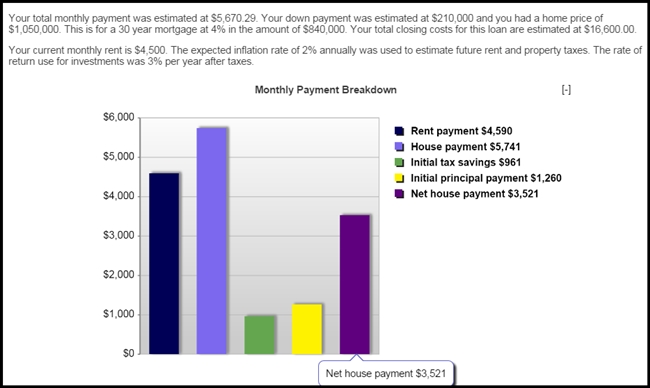 Someone moving to or within San Francisco basically has 2 choices: Renting at market rate or buying at market rate. And rents have gone up so much locally that after accounting for multiple tax benefits, low interest rates, principal loan-balance pay-down (which adds to home equity) and estimated long-term appreciation, buying often looks like the financially attractive course. Above is one chart of a much more detailed analysis comparing the cost of renting a 2-bedroom San Francisco apartment at the current median asking rent, with the monthly cost of buying an SF home at the current median sales price after adjusting for tax deductions and principal pay-down.As seen above, the net monthly cost of buying can be less renting.

There are many personal and monetary issues that pertain to this decision and our analysis is based on a number of financial assumptions – interest, inflation, appreciation and tax rates; downpayment amount; maintenance and insurance costs – that you may not agree with or might not apply to you. You can review our full analysis and also perform your own calculations here: Renting vs. Buying in San Francisco

The real estate market is often spoken about as if it was a single monolithic entity performing in a consistent way – but nothing could be further from the truth. Markets vary enormously between states, cities, neighborhoods, property types and price segments. The S&P Case-Shiller Index looks at the Bay Area market* by breaking all house sales into 3 price segments – low, mid and high price tiers – each containing one third of the total number of sales.The exact price range of each tier changes as the market appreciates or depreciates, or more sales occur in one price range than another: Right now, the “high-price tier” starts at $872,000. In February of 2012, the high tier started at a threshold of $537,000.

Breaking down the market by price segment is a vast over-simplification – there are many other factors at play – but generally speaking, the lower the price range, the more the housing segment was impacted by subprime/ predatory lending in 2003 – 2006. In turn, that caused the larger price bubble, and then the bigger crash as the foreclosure/ distressed-property crisis took hold.

Most Bay Area counties are dominated by homes in 2 price tiers, low and mid, or mid and high, but there are pockets of homes in all tiers within most counties. The numbers in the 3 charts below all relate to a January 2000 value designated as 100. Thus a reading of 199 indicates a home price 99% above that of January 2000.

The low-price third of sales was massively impacted by subprime lending – people buying homes they couldn’t actually afford. It experienced an insane appreciation rate of 170% from 2000 to 2006, creating an enormous bubble. It then crashed by a catastrophic 60% due to the distressed-home phenomenon. As distressed sales dwindled, the recovery since 2012 has been spectacular, up 81%, but prices are still well below peak values and may not re-attain them for years. (If prices go down 60%, they must go back up 148% to get back to where they started.) Many homes in Alameda, Contra Costa, Napa, Sonoma and Solano* counties fall into this market segment.

Interestingly, this price segment was not impacted by the popping of the dot-com bubble, perhaps because these homeowners were less likely to be speculating in the technology stock market. 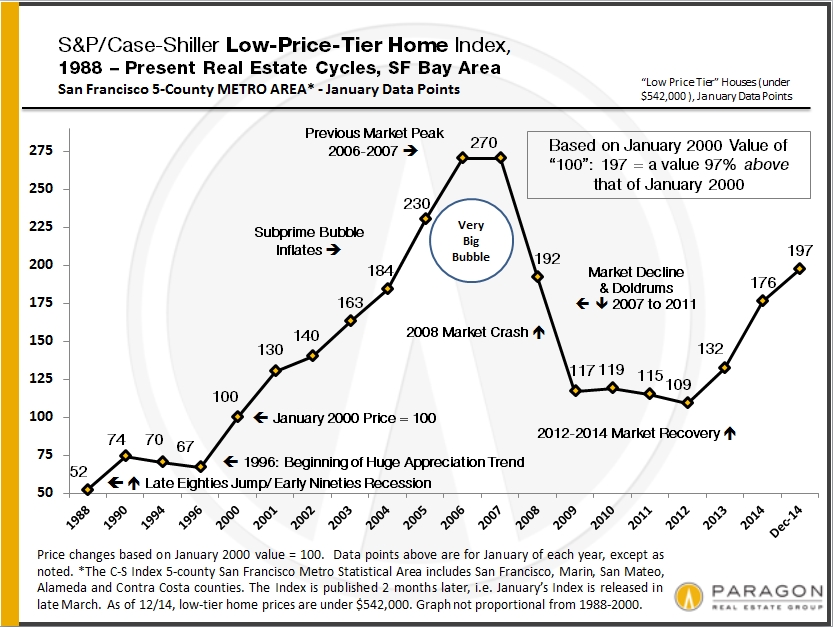 The mid-price segment was less hammered by subprime, but still significantly impacted. Its appreciation rate was 119% from 2000 to 2006 and its market then crashed about 42% before starting its recovery in 2012. This segment is now up 55% from the bottom and close to its 2006 peak value. Many homes in northern Marin, the southern border neighborhoods of San Francisco, northern San Mateo and various areas of the other counties fall into this price segment. 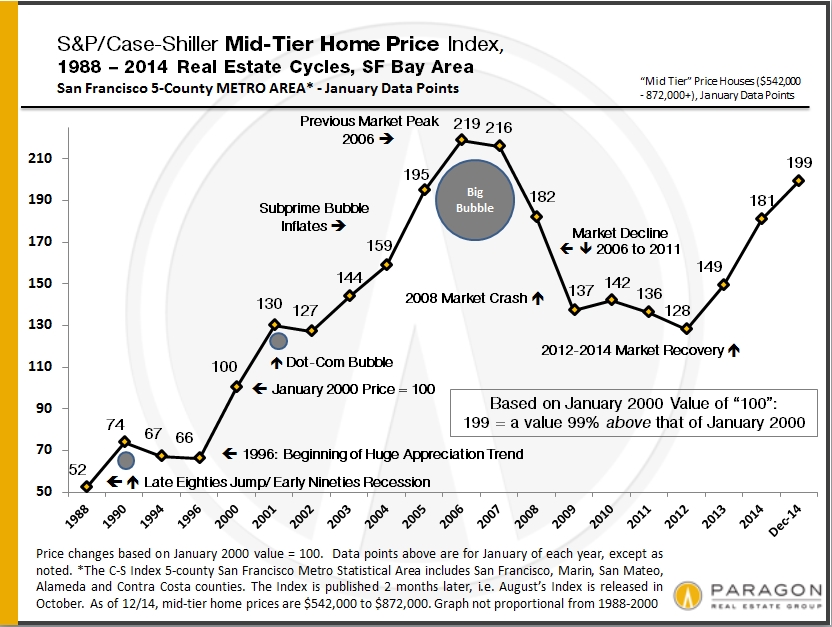 Most of the houses in San Francisco, San Mateo and southern Marin, as well as affluent areas in other counties, fall into the high-price third of Bay Area sales, which was not deeply affected by subprime lending and foreclosure sales. Though its bubble and crash seemed dramatic enough to those experiencing them, they were much smaller: It appreciated 84% from 2000 to 2006, including a hiccup drop in 2001 after the popping of the dot-com bubble, and then fell about 25% (compared to 60% for the low-price tier). Its strong recovery since 2012, up about 44%, has now put this segment approximately 8% above its previous peak value in 2006. 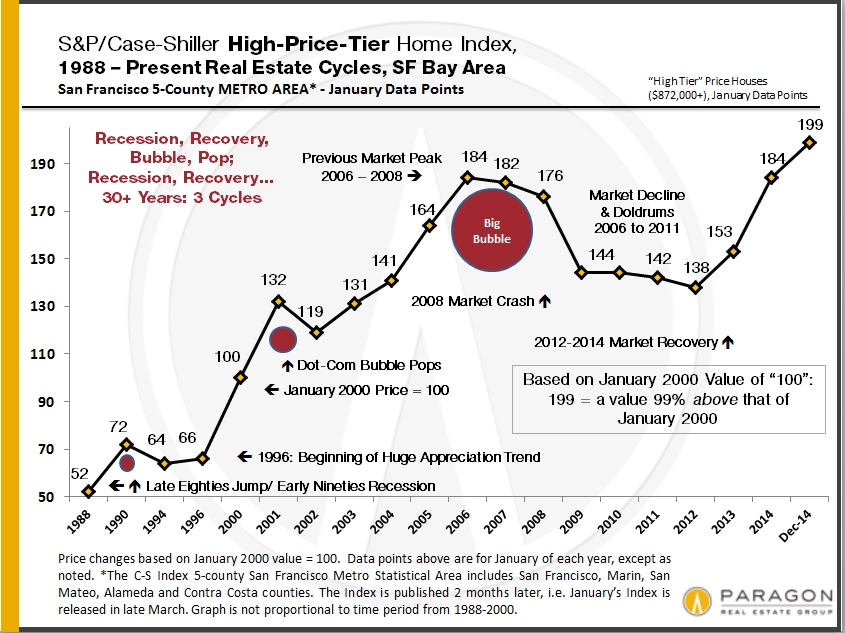 Many neighborhoods in San Francisco, Marin and San Mateo would easily qualify for an “ultra-high” price segment, and it remains generally true that the higher the price, the smaller the crash. For example, most of the more affluent neighborhoods in the city peaked in value in 2007 or early 2008, then dropped 15% to 20% after the 2008 financial-markets crash.Due to the high-tech boom, many areas of San Francisco and San Mateo have significantly outperformed their price-tier in recent years.

Though the price tiers had radically different bubbles, crashes and recoveries, all 3 are now almost exactly the same in relation to the year 2000, showing appreciation of 97% to 99% over the past 15 years. This suggests equilibrium is once again being achieved between them. 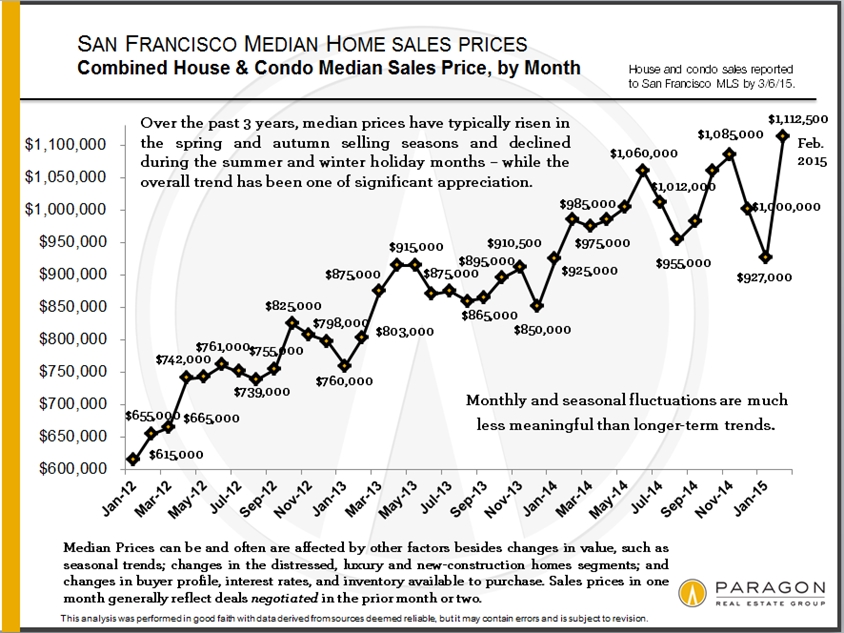 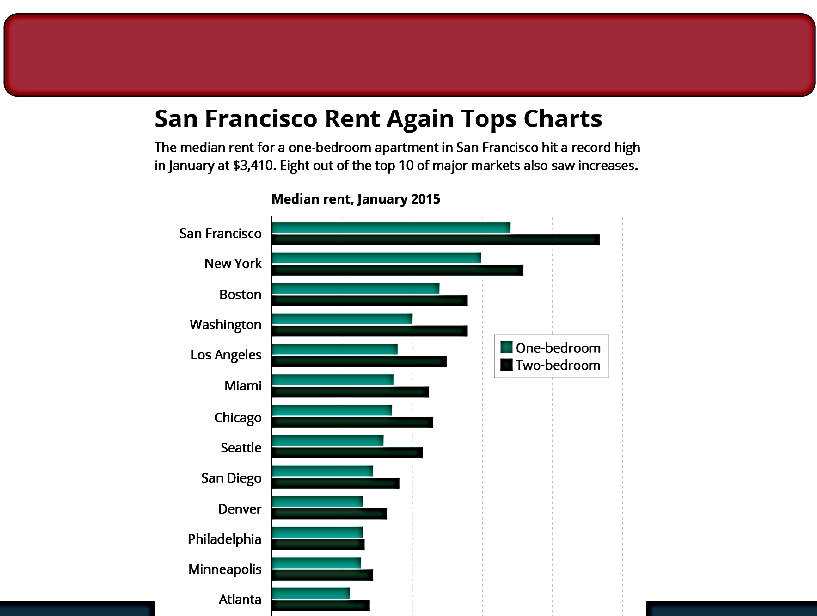