How do Distress Sales Affect Median Prices in San Francisco?

How do Distress Sales Affect Median Prices in San Francisco?

Distress home sales – bank-owned properties and short sales – have a major impact on the overall median sales price in San Francisco, even though the city is much less impacted by such sales than the greater Bay Area or California. In actual numbers and as a percentage of sales, distress sales have been increasing in the city in the first quarter of 2011 – now running at 20% – 25% of sales — and since distress sales are by far the lowest-priced sales, they drag down the overall median price for San Francisco. (The median price is that price at which half the sales occur for more and half for less, so it is mostly affected by the quantity of sales at different price points. It has no relation to average sales price.)

The median sales price in March in SF dropped 5% from March 2010, (from $710,000 to $675,000) and it is mostly because of the increasing number of distress sales. But if we break down the statistics, we find that the median price for distress sales over that period dropped from $470,500 to $441,000, but the median price for regular home sales stayed virtually the same, actually going up a tad from $750,000 in March 2010 to $759,500 in March 2011. That is, distress sales are impacting the overall SF median price due to their increasing numbers and decreasing prices, but not the overall, regular, non-distress median home price.

In fact, the regular median-home price has been generally stable for the last 20 – 24 months, and shows no sign of declining.

Why is that? It’s because distress sales are clustered in specific neighborhoods and impact the values there, while having little or no impact on most of the neighborhoods of San Francisco. If you want to buy a house in Pacific Heights, the fact that you can buy a foreclosure house, with the fixtures ripped out, in Bayview doesn’t make much difference to you. To a large degree, the distress home market and the regular home market in San Francisco are different markets in different neighborhoods with different buyers.

In fact, buyer demand — as measured by months’ supply of inventory, average days on market, percentage of listings accepting offers and other statistical parameters – has significantly improved since 2011 began, for both distress homes (albeit with declining prices) and for non-distress homes (with generally stable prices, with perhaps the beginning of a slight upward pressure on values).

As can be seen in the two charts below, distress house sales continue to be clustered in Realtor Districts 3 & 10, the band of less affluent neighborhoods that run along the southern border of the city. Together, they make up about 60% of all distress house sales, and their home values have been hugely affected by such sales. Other areas, such as Districts 5, Noe/Castro/Haight, and 7, Pacific Heights/Marina, have had very few distress sales and they have virtually no impact on values there.

Distress condo sales are mostly clustered in the SOMA/ South Beach/ Mission Bay area where the huge new developments went up in the past 10 years, and that is the area where condo values have been impacted most. On a percentage basis, again Districts 3 & 10 have been deeply affected, but in absolute numbers, their condo markets are relatively small. 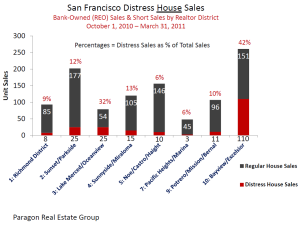 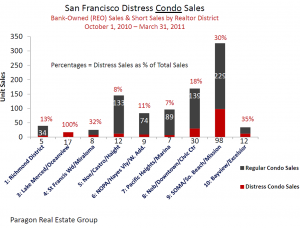