San Francisco led the Bay Area and the nation when its real estate recovery began in early 2012. Within the city itself, the more affluent neighborhoods led the rebound from the 2008 – 2011 recession and saw the highest rates of home price appreciation. That dynamic began to shift in 2014, when the more affordable neighborhoods began to take the lead in demand and in appreciation. All price segments in San Francisco have cooled off from the overheated frenzy of the spring 2015 selling season – this cooling is a common seasonal phenomenon – but while lower and mid-priced homes in the city have continued to remain solidly in “seller’s market” territory, in the luxury home segment, the dynamic between buyers and sellers has fundamentally shifted, at least for the time being.

A number of reasons may explain this: Firstly, the affluent are much more invested in the stock market than other groups, and the volatility of late August, early September may have encouraged more wealthy homeowners to sell (before things might possibly get worse), and more wealthy homebuyers to postpone buying until things clarified.As of very early November, the S&P 500 has regained its lost ground from August, so this effect may fade. Secondly, it’s certainly possible that sellers and listing agents have finally pushed the envelope on prices a little too far: San Francisco’s high prices have clearly motivated some buyers to look at options outside the city (which has helped pressurize the markets of other counties). Last but not least, more and more luxury condos are being built in San Francisco: Growing supply not only gives buyers more options and more negotiating room, but it decreases the urgency to write strong offers quickly and the motivation to compete with other buyers.

However, the luxury home market hasn’t “crashed”: there are still high-end homes selling very quickly for very high prices amid competitive bidding.But it has markedly cooled and the number of luxury home listings in San Francisco hit a new high in October, so correct pricing has becomes increasingly vital. It remains to see if this change is just a transitory market blip – such blips are not uncommon in financial or real estate markets – or the beginning of a longer term reality. 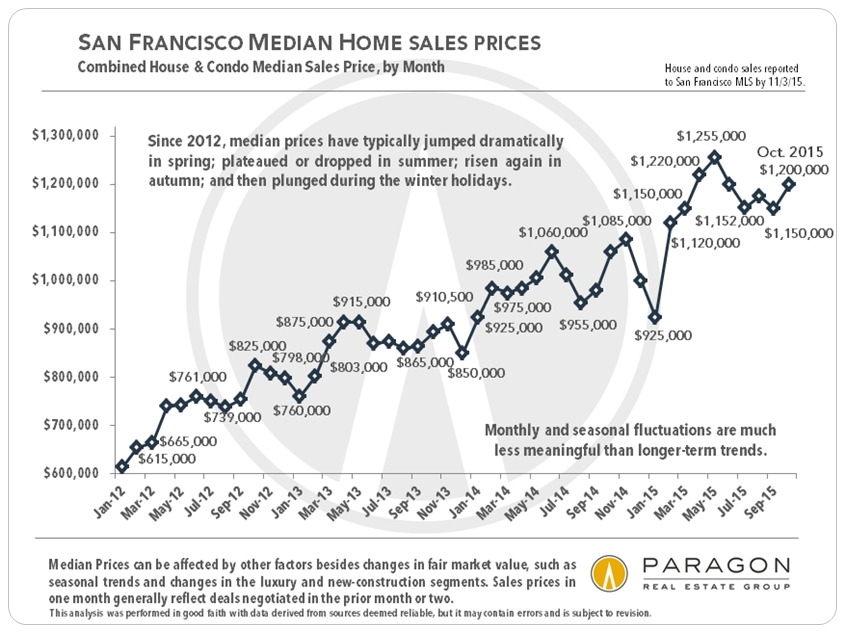 Even with the general cooling in the market since spring and the significant slowdown in higher end home sales, the overall median sales price for houses and condos bounced back up to $1,200,000 in October. Median prices are impacted by seasonal trends: typically peaking in the spring, dropping in the summer, up again in the autumn and then plunging during the winter holidays. This has more to do with inventory than with changes in fair market value. Short-term fluctuations are not particularly meaningful: It is the longer-term trend that gives a sense of what’s going on in the market. 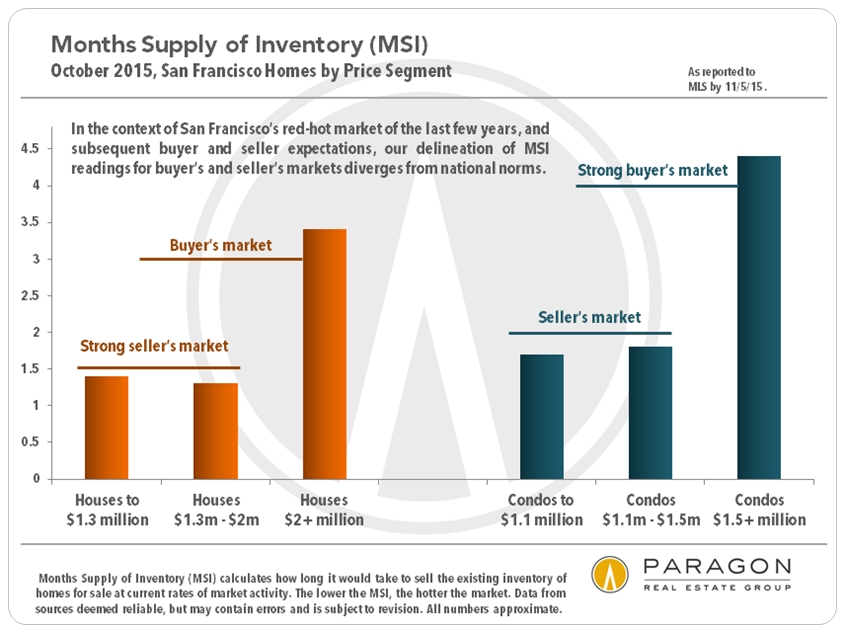 Months Supply of Inventory (MSI) is a classic measurement of supply and demand, calculating the time it would take to sell the existing inventory of homes for sale at the current rate of market activity. The lower the MSI, the greater the demand as compared to the supply, i.e. the hotter the market. The house market in San Francisco has been stronger than the condo market since the recovery began – though the condo market has been crazy hot as well – because the supply of houses is more limited and is dwindling as a percentage of sales because virtually no new houses are being added to inventory. However, new condos are being built in quantity. This chart above illustrates the dramatic difference in the markets for homes up to the median price ($1.3 million for houses, $1.1 million for condos) and in the next price segment higher, versus the luxury home segment, defined here as houses selling for $2,000,000+ and condos for $1,500,000+. (By this definition, luxury sales currently make up about 20% of San Francisco’s home sales.)

Because SF has been so hot for so long, we’ve adjusted the thresholds for what MSI readings define “seller’s market” and “buyer’s market” to better reflect the psychology of the current market. 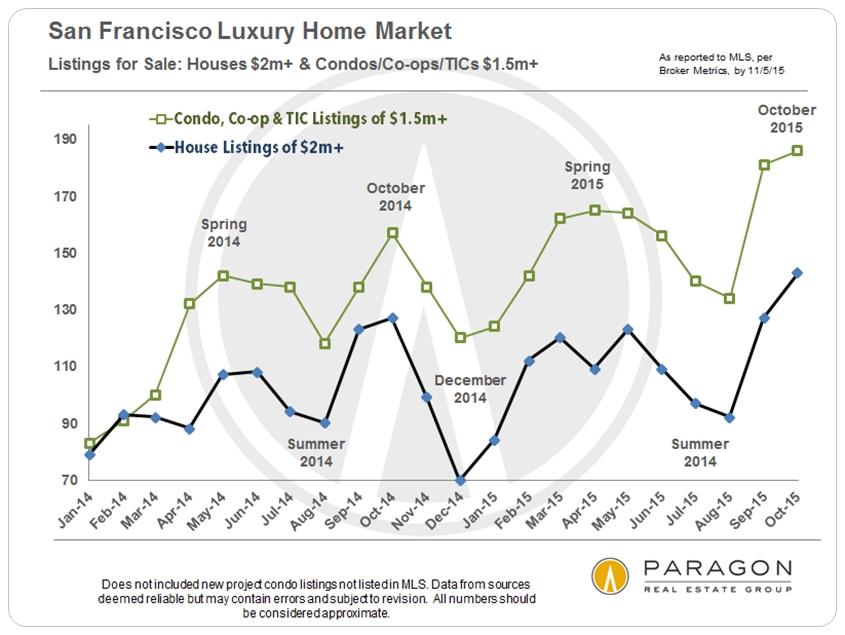 As mentioned earlier, the number of high-end house and condo listings hit all-time highs in October, while sales numbers are well below levels hit in the previous 2 years. Even more so than the general market, the luxury segment is dramatically affected by seasonality and typically goes into deep hibernation from Thanksgiving to mid-January. Having so many active listings on the market just prior to the winter holiday doldrums is one of the reasons why we designate the luxury-home segment as currently having moved into “buyer’s market” territory. 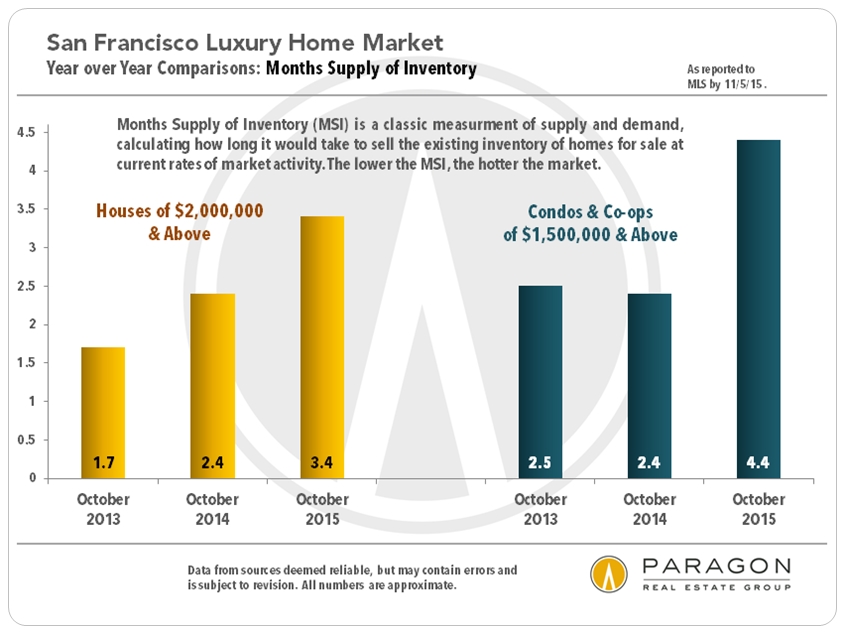 This chart above illustrates the change in the luxury home market supply and demand balance over the past three Octobers. As a further point of context to what has happened in the past year, during the feverish market of this past spring, the MSI for luxury houses hit a low of 1.6 months of inventory and the MSI for luxury condos hit a low of 1.7 months. Since 2012, spring has consistently been the hottest, most competitive, selling season of the year and most home price appreciation has occurred during that time. 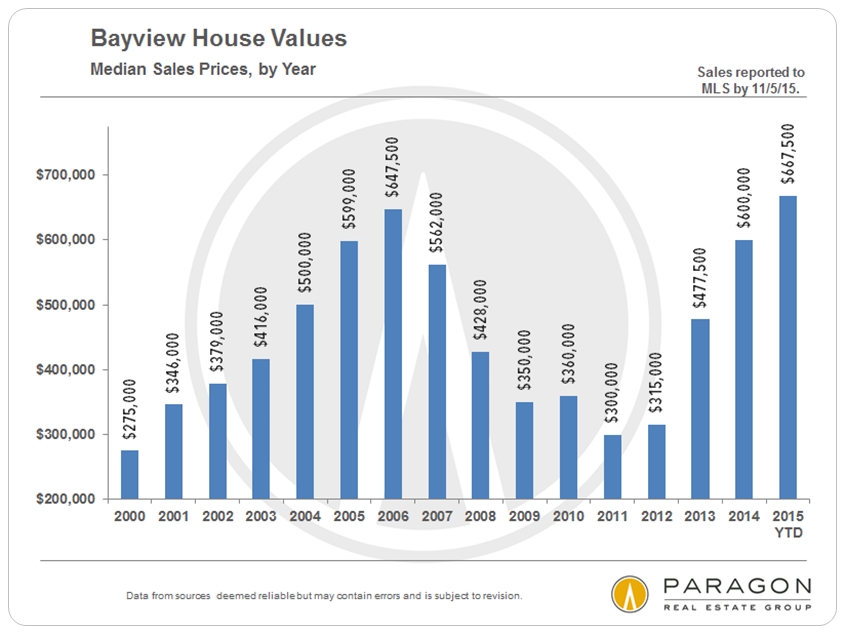 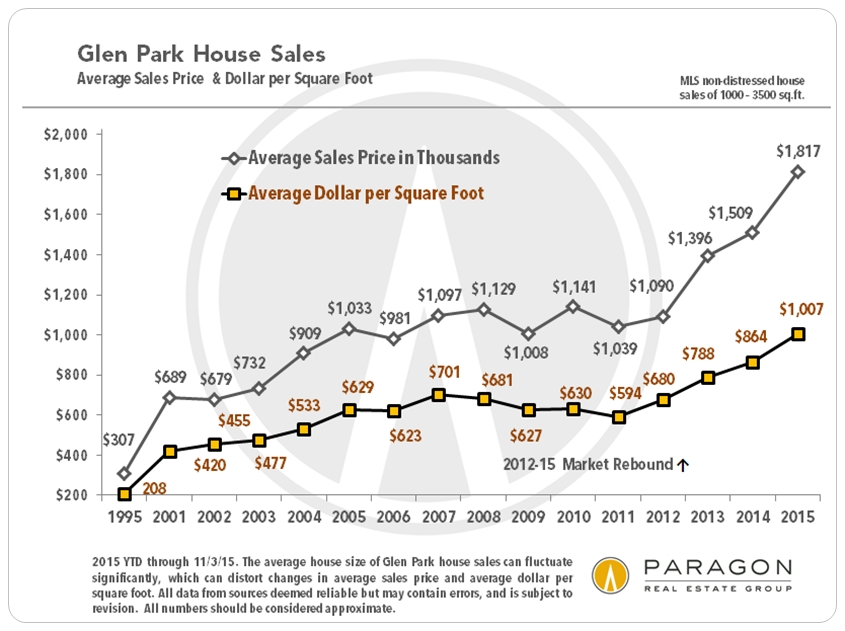 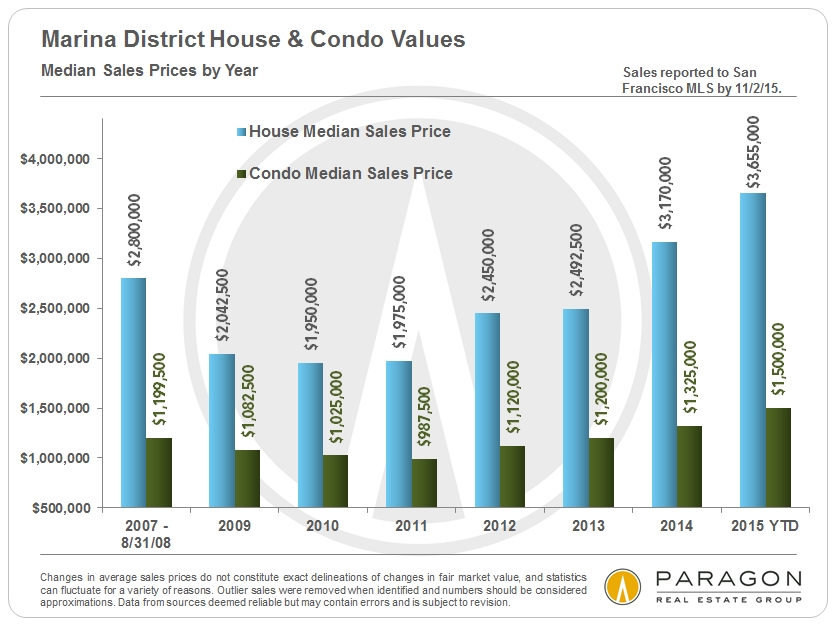 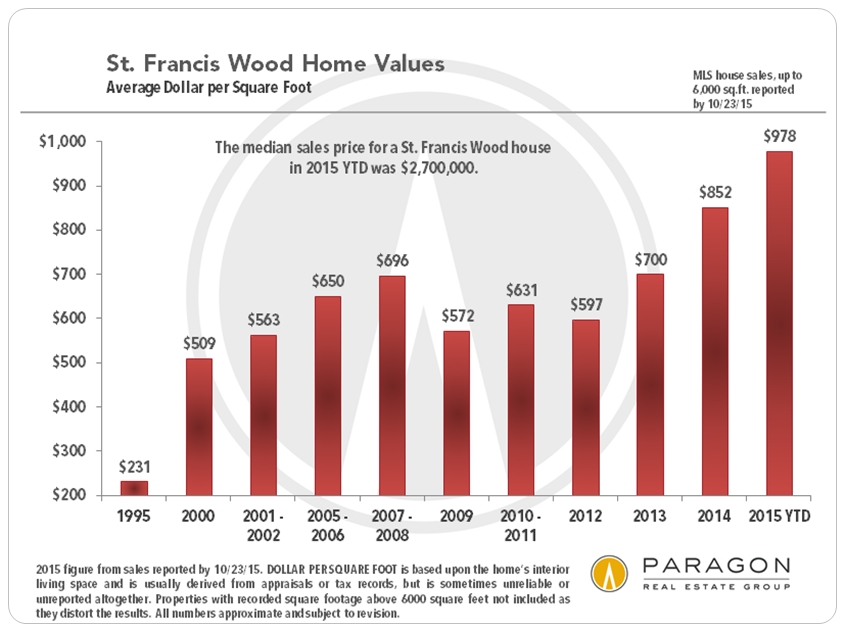 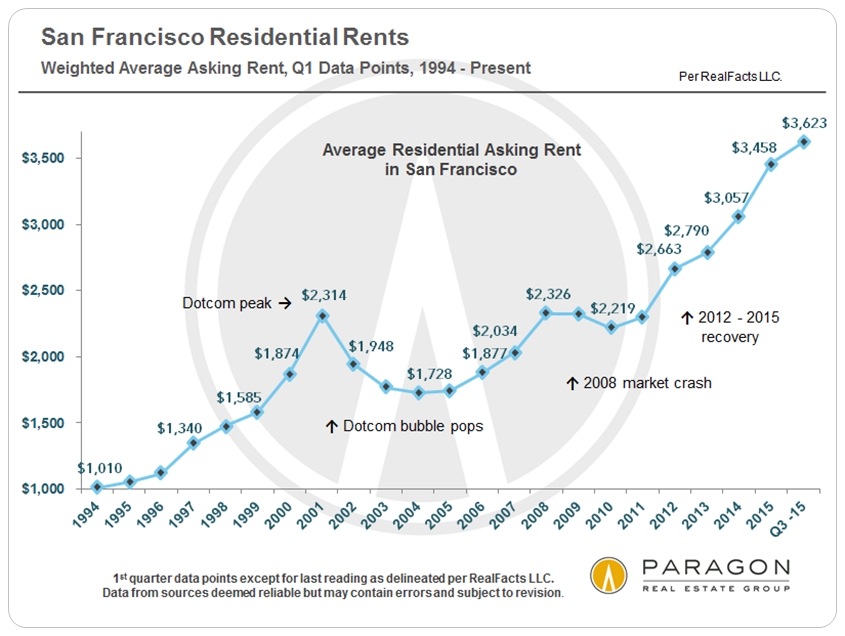 The real estate market has been challenging for homebuyers these past few years, but for anyone looking to rent a home in the city, it has been distinctly more difficult financially. Homebuyers have the benefit of historically low interest rates, multiple tax advantages and, hopefully, substantial appreciation gains over time; renters enjoy none of those advantages (though admittedly there can be long-term benefits to rent control for renters that qualify). Even with the big jump in home prices over the past 4 years, factoring in the 35% – 40% decline in interest rates and adjusting for inflation, the ongoing monthly cost of homeownership (for someone putting 20% down) is roughly the same as it was in 2007. But average monthly asking rents in the city have surged over 50% during the same period.

This has made rental property ownership an increasingly lucrative proposition, which we discuss in more detail in our last Commercial Brokerage report: Bay Area Apartment Building Market 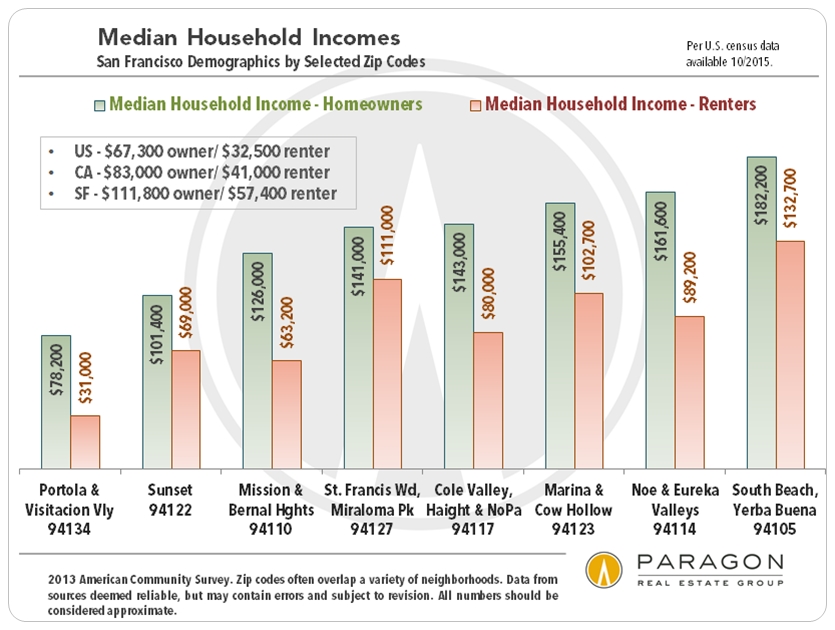 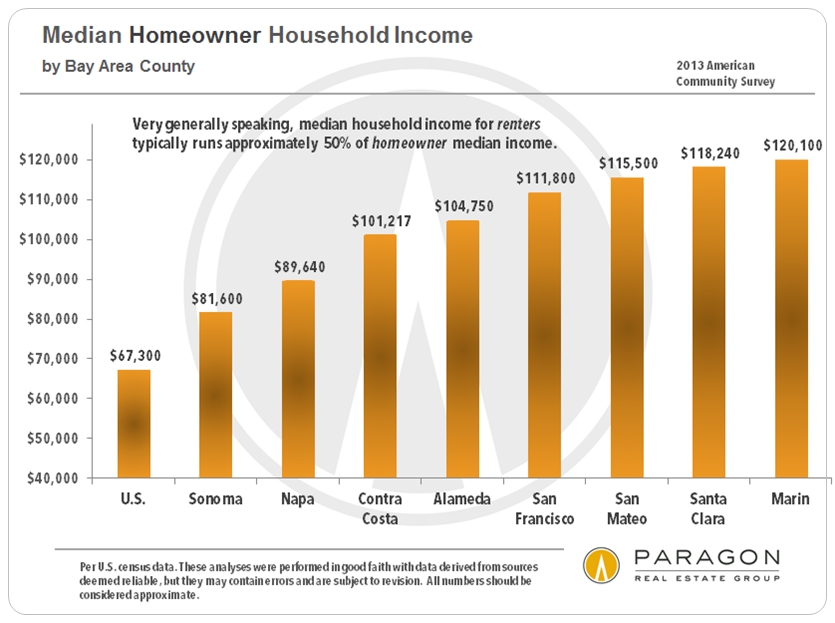